Cryptocurrencies: The Future of Banknotes?
Written by Tanay Jain and Arth Jain on 21-02-2021 in Wealthfare Deconstruct
7 minutes read 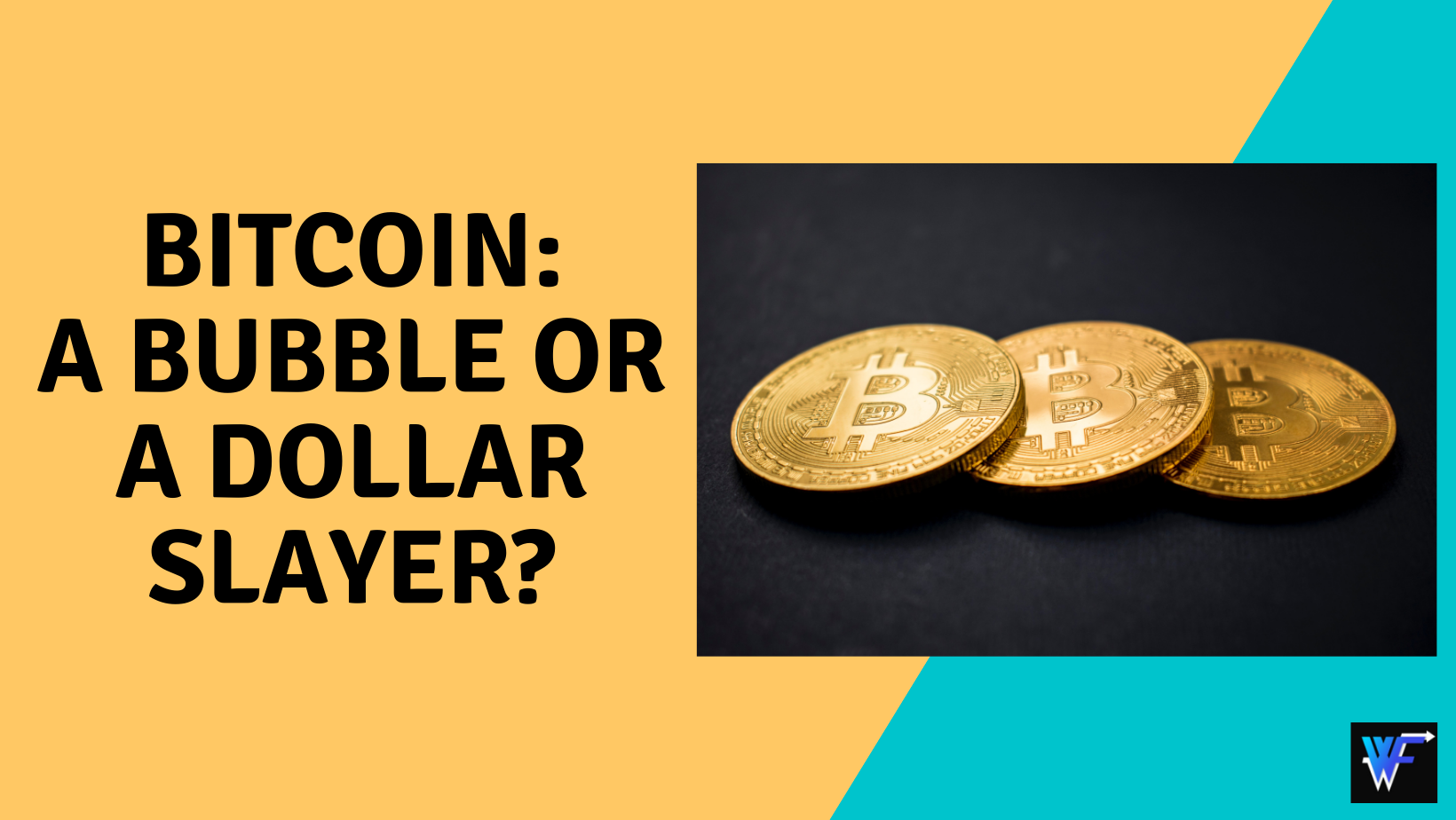 “Bitcoin saga, I get the use case, get the distrust over excessive printing of the dollar which is not backed by anything really. (5 trillion for 2020 in the USA is obscene)... All said and done if someone buys a nuclear warhead with bitcoins tomorrow, what happens then?”

The scoop:
“We are at the cusp of a major financial revolution.” “The world is going to fundamentally change how we exchange value.” “Who let the Doge Out?” You may have heard some of these big claims from notable people across the world. Cryptocurrencies are getting popular in the masses and regularly make news pieces. With Bitcoin surging past a staggering $50,000, a lot of people want a part of it, and a lot are increasingly skeptical of its high volatility. To understand what lies behind Bitcoin, Ethereum, Litecoin, and other cryptocurrencies, understanding blockchain is key. It’s the underlying software that powers the whole thing.

What is blockchain technology and how does cryptocurrency work?
In 2008, Satoshi Nakamoto published the paper, “Bitcoin: A peer-to-peer electronic cash system”. He talked about a digital currency that can be used for transactions of that currency between two parties without the need for any intermediary. Now, before we move on here let us first understand how transactions using ‘centralized’ currencies work.

When you transfer money to someone via a bank transfer, you rely on the bank (the intermediary) to establish trust and authenticity of the parties involved and the validity of the transaction. The banks maintain a record of these transactions (a ledger) on their servers to prevent double-spending and fraud. Generally, banks take a small fee for these transactions.

In a decentralized network, this ledger is distributed over a network of computers. All computers on this network have a copy of this ledger and whenever a transaction is made it is broadcasted to all other computers, which then verify the validity of this transaction using a complex cryptography. These verifiers are called miners and for successfully cracking the cryptography for a particular transaction these miners are rewarded in bitcoin.

Although by protocol only 21 million bitcoins will ever be created, therefore it has a finite supply. No single party controls this network and as all transactions are encrypted and verified, fraud, double-entry, or duplication, and reliance on an intermediary is completely eliminated and that is the beauty of it.

On average 500 transactions make up a block and the first and last transactions of a block are securely linked to other blocks by a key, thus forming a “block-chain”. The longer the chain the more trustworthy it is. This decentralized network is “unhackable”... okay, technically that’s incorrect, to take control of the network, you need to control more than 50% of the computers in the network, and that would require so much electricity and computing power that it will cause hundreds of billions of dollars at this point.

Bitcoin:
Bitcoin has a particular value because people believe it has value and hence, as people’s beliefs change, its value fluctuates. One day, you could buy an apple with a Bitcoin, the second day a car, third day, it might go anywhere. For it or any other cryptocurrency to be immune to small market reactions, they would have to be institutionalized, meaning everybody believes its value and extremely stable markets trade in it, akin to gold and the U.S. dollar.

The recent rise in the price of bitcoin can be attributed to quite a few facts: 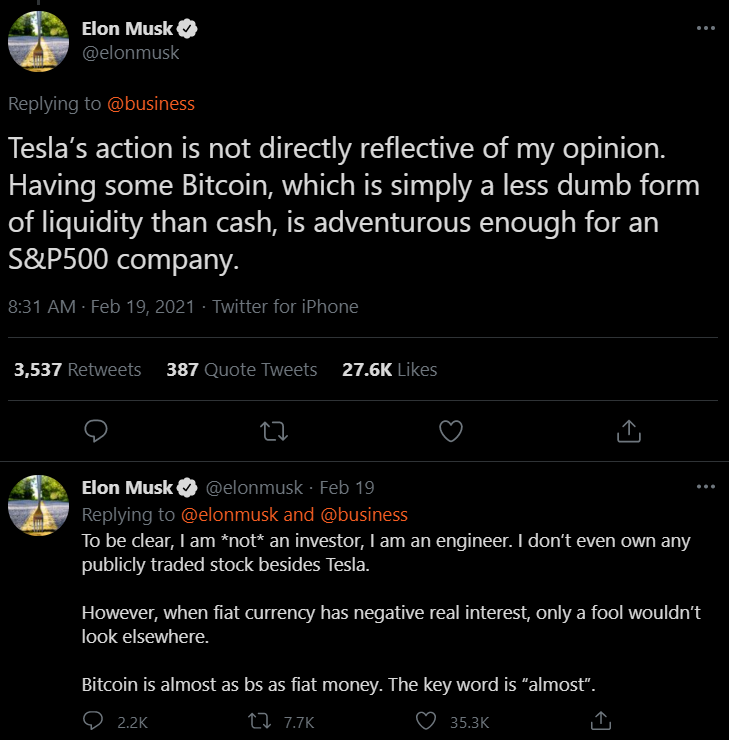 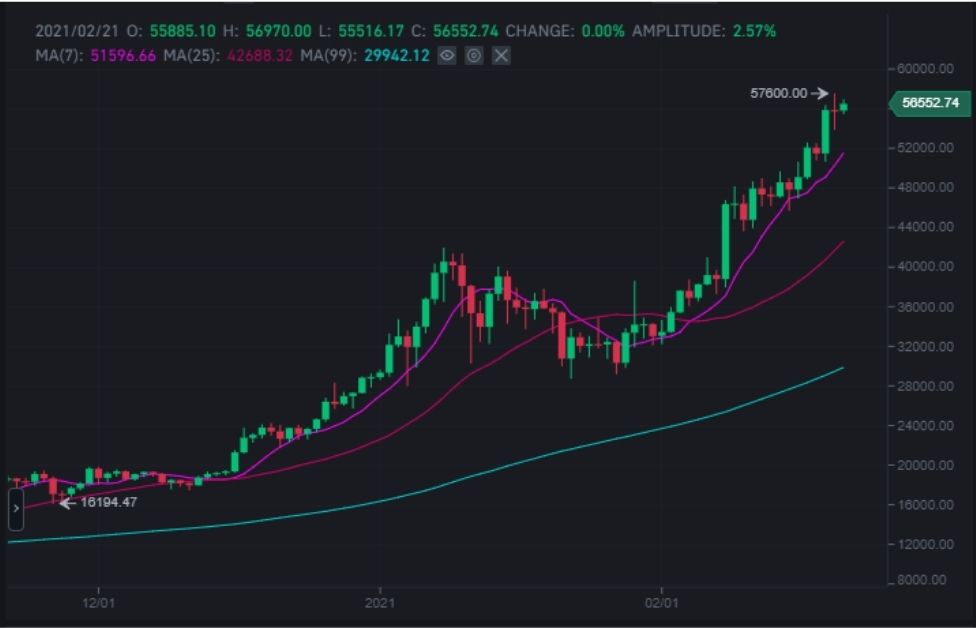 Dogecoin and other Altcoins:
Almost anyone can start a cryptocurrency on the blockchain. As a joke to thousands of cryptos popping up, a guy from Adobe and a guy from IBM put a dog meme face to a coin and launched ‘Dogecoin’. People got it and even dipped in to be a part of the joke. Part-time inventor, full-time meme lord, Elon Musk is the unofficial commander of taking the Shiba Inu to the moon. Yeah, so suppose he needs a break and goes to Twitter and sees Dogecoin. Jackpot! More memes. But a bunch of people don’t get the joke and are putting life savings in Dogecoin. 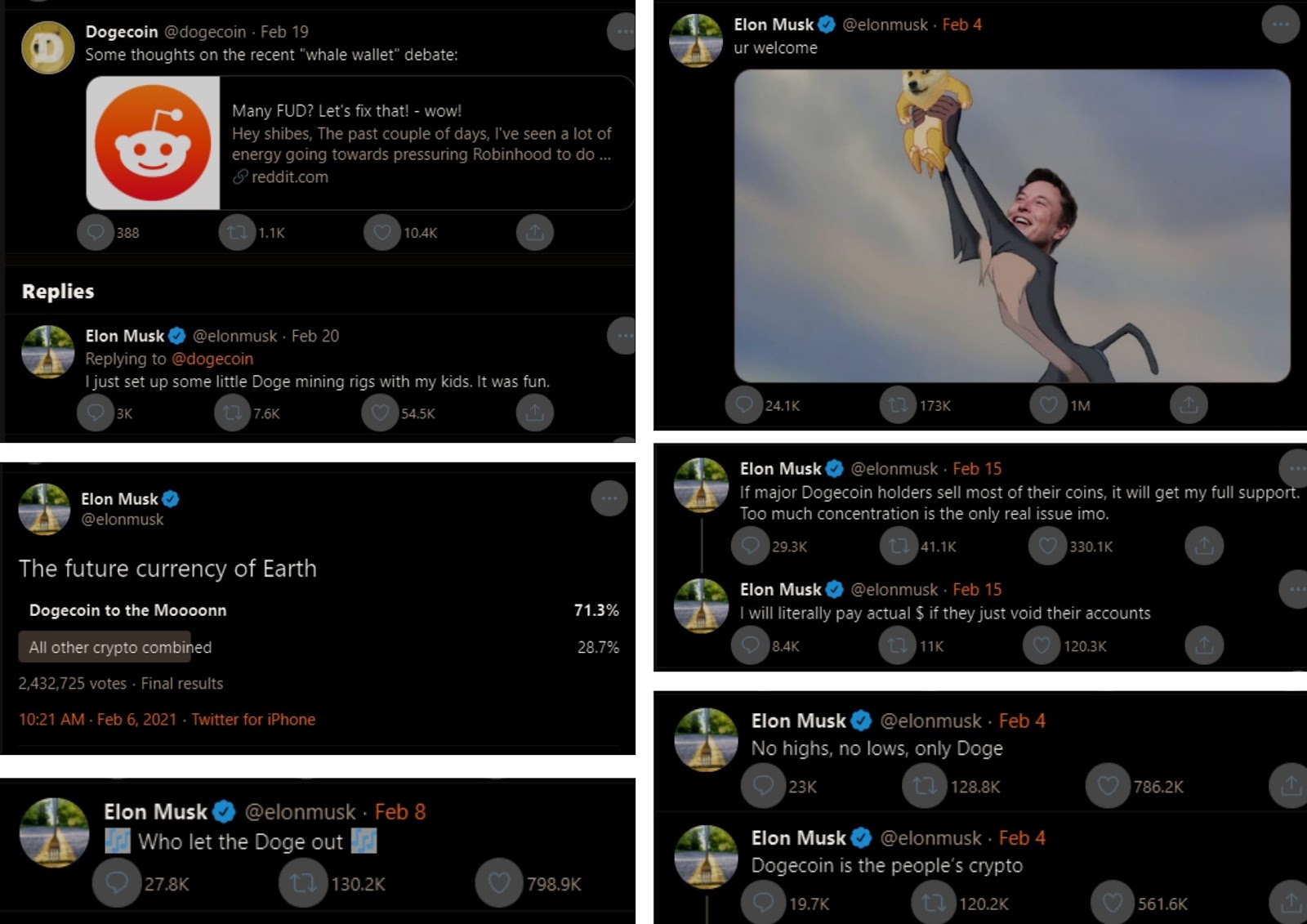 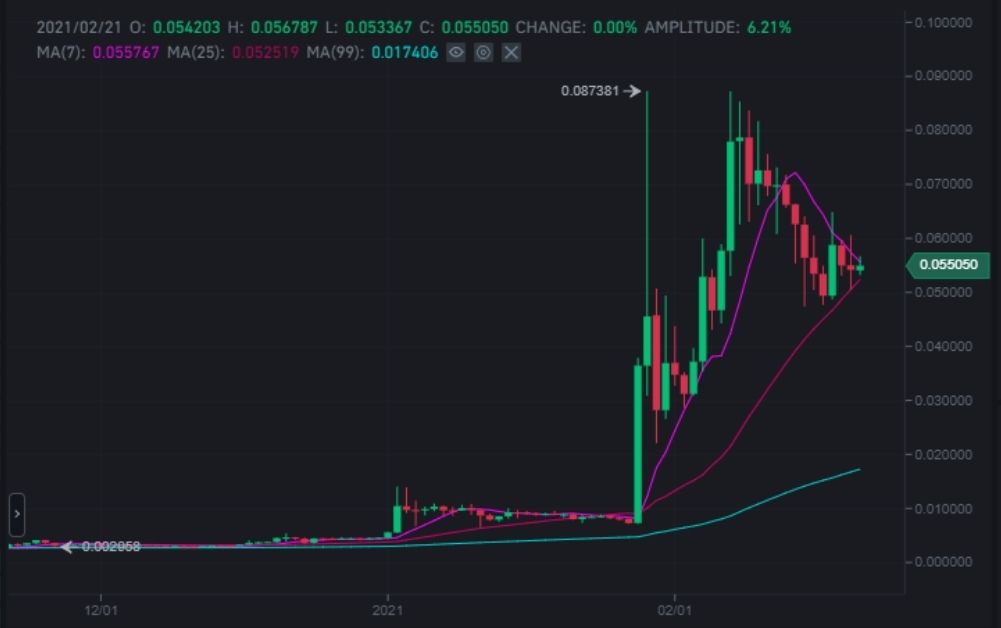 What are Central Bank Digital Currencies (CBDC) and what gives currencies intrinsic value?
Before getting into other currencies, think about how a currency, any currency gains its value. The short answer is, in its adoption. After WWII, the U.S. became the strongest power in the world as it sold a lot of weapons to its allies accepting payment in gold. The U.S. had almost 70% of gold in the world at this point and as a consequence of this economic power, in 1947, 44 nations came together to accept the dollar as the currency for international trade which was pegged to gold.

So the U.S. Federal Reserve started printing more dollars to facilitate global trade in exchange for its gold and the modern age started. Over the decades, the U.S. dollar became so popular in global trade, coupled with the very efficient banking system in the U.S., that President Richard Nixon lifted the dollar off the gold standard in 1971 concluding that the dollar was more stable as a global currency than gold. Today, this $ sign runs 88% of the foreign exchange globally. This helps the U.S. also keep greater surveillance of where the money is being traded globally.

The case for centrally issued digital currencies has increased recently when the U.S. often tries to leverage this sway by banning countries like Russia, North Korea, and Iran from trading in dollars when they don’t comply with their geopolitical sanctions. Misuse of powers like these forces countries to consider other currencies. The European Central Bank, Russia, India all have plans to issue state digital currencies with varied differences. China is the most advanced in this respect. It tested a pilot program of digital currencies.

CBDCs so far are distributed and maintained by central governments, and not on a decentralized blockchain. Think of it as the future of banknotes.

Is India getting rid of crypto?
After the Union Budget ‘21 was announced, news cropped up that India had a bill in the works that will impose a total ban on all cryptocurrencies. Although the specifics aren’t necessarily clear, there are a few ways this could go. Regulate or complete ban?

Against the backdrop of Bitcoin touching $50,000 and Dogecoin gaining traction, this move comes as a shocker. The crypto community is strongly against a complete ban, but are hopeful that something like Bitcoin won’t be completely banned but will only be regulated. The bill also proposes to lay out a framework to issue India’s own digital currency. It will “create a facilitative framework for the creation of the official digital currency to be issued by the Reserve Bank of India (RBI),” said the agenda, published on the lower house website on Friday.

There are still some unanswered questions, what if the bill isn’t proposed in this session of the parliament?  If a blanket ban is imposed how would the government then manage to reimburse the 7 million Indians who hold over 1 billion dollars in cryptocurrency? Only time will tell.

The Political Take:
Governments are scared of losing control over the financial and monetary system. They don’t want to make the economy autonomous. They may print digital money, but adopting blockchain is giving up all authority to print money when needed and organize its flow in the economy. Mining farms across the world do the work any central agency would do. This makes central banks obsolete.

It poses a great threat to the national currency already used in parallel to these cryptos, which are susceptible to market pressures and undermines its value. Today, over 70% of the global processing power running the Bitcoin network is home to China. Despite this, Beijing has banned its use and asked miners to invalidate and block transactions at certain addresses that are using Bitcoin in the economy.

Conclusion:
With India mulling to ban cryptocurrencies (In what form? We don’t know yet), major corporations showing interest in accepting it as a mode of payment, the world of cryptocurrencies is at an inflection point. Threatening a country’s control over its financial and monetary system, they will either embrace it, ban it or start a CBDC of theirs. At the end of the day, it boils down to adoption and what a currency derives its value from.

For massively speculative currencies like Bitcoin, it has value because people say it does and if one day they decide it doesn’t, it might as well drop to 0. Being too secure is both a boon and a bane for cryptocurrencies, issues like terror financing are a significant challenge for governments to curb. Will Bitcoin become ‘digital gold’? Will Dogecoin ever reach $1? Well, there is a strong argument for both sides and smart brains are split on this. What do you think? Comment below!