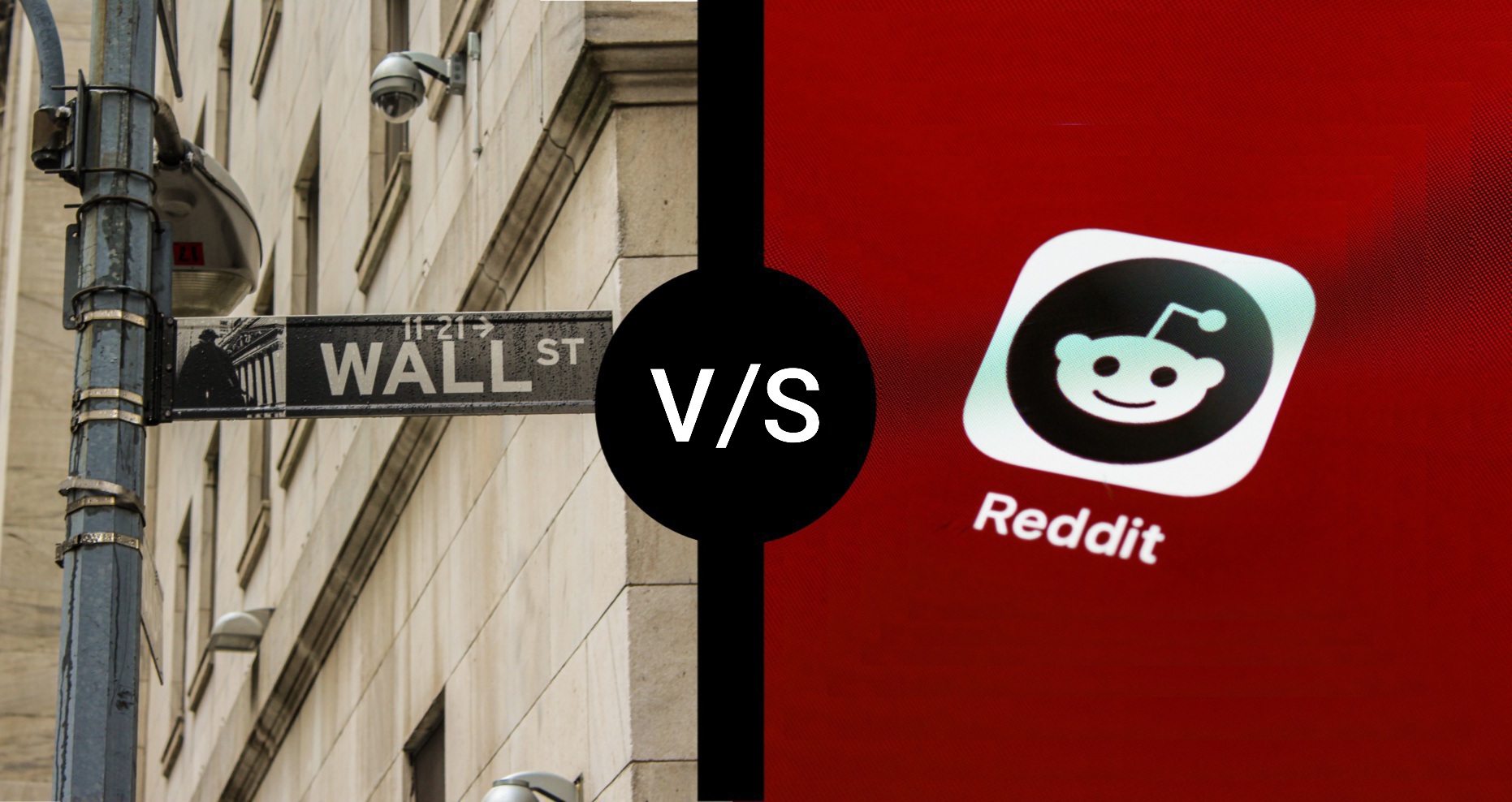 Overview:
$GME, you’ve probably seen this stock symbol making finance news headlines in the past week. So, what’s all the buzz about, we’ll simplify it in today’s deconstruct. Let’s start off by listing all the entities involved - In the red corner we have the billionaire hedge funds and professional Wall Street investors and in the blue corner, we have a regiment of meme-loving folks from the r/wallstreetbets Reddit forum.

Apart from them, we will also see some of the unofficial meme lord Elon Musk and billionaire investor Chamath Palihapitiya. For a stock that has had the most bittersweet ride in the past few days, this is the story of how a bunch of retail traders took down a hedge fund.

An analysis of GameStop:
The centrepiece of this story is GameStop. GameStop is an American video game and consumer merchandise retailer. It is a network of brick-and-mortar stores where you can just walk in and buy games and consoles. At its prime between 2004 and 2014, it made multiple acquisitions totalling well over $2.5 billion. In the year 2011, their digital revenue was $190 million which grew to $600 million in 2012. This rise would continue for another couple of years.

As the market changed rapidly and consumer habits were changing because of the likes of Xbox Live, Playstation Network, and Steam all games were offered in a downloadable digital copy which eliminated the need for buying physical copies. GameStop, whose business revolved around having walk-in customers in their physical stores felt the effects of this, and in the 2016 holiday season, they reported a drop of 16.4% in sales. The GameStop stock ($GME) fell 16% in 2016. As their miseries continued on February 2, 2019, they reported a record-breaking net loss of $673 million.

Enter, Ryan Cohen- To the moon 🚀:
Ryan Cohen (RC Ventures) is the co-founder and former CEO of chewy.com. He knows a thing or two about eCommerce. In 2017 he sold Chewy to PetSmart for $3.35 billion. He believed GameStop is ripe for a turnaround and so in August 2020 he bought $79 million worth of $GME stock, he now owns 13% of the company. He wrote a letter to the board of directors of GameStop talking about his plans with the company and he got 3 seats on the board of the company.

“Their substantial e-commerce and technology expertise will help us accelerate our transformation plans and fully capture the significant growth opportunities ahead for GameStop,” said GameStop. Ryan Cohen summarizing his optimistic outlook on the company said, "We are excited to bring our customer-obsessed mindset and technology experience to GameStop and its strategic assets...expanding the ways in which it delights customers and by becoming the ultimate destination for gamers."

So GameStop which was losing money was now “poised” to take over eCommerce. Here’s an interesting bit of information, Dr Mike Burry (yes, from the movie Big Short) who’s known to make investments that “conventionally” wouldn’t be great ideas, in August 2019 invested in $GME buying at around $4 a share.

So we know our bulls, time to meet their key adversaries, the bears/shorts; Melvin Capital Management and Citron Research. Melvin had a $55+ million short position in $GME. They believed that the company was bound to fail and it cannot keep up with this business for long, and at this stage it seems like a fair thing to do, right? As this short was via listed put options, their short position was public.

Before we move forward let’s understand some key terms here- going long on a stock means you buy a stock with the expectation that the price of that stock will go up in the future and you then sell it for a profit and going short means that you’re betting that the price of the stock will go down. How does shorting work? Here’s a simple example, let’s say based on your research you’re expecting that the supply of tomatoes in the market is going to suddenly increase and the demand won’t be that much as a result of which the price of tomatoes will go down.

To profit from this, you borrow 10 tomatoes from your friend which you’ll have to return in the future. The current market price of these tomatoes is Rs.10 each and you sell them at this price for a total of Rs.100. You now have Rs.100 and 0 tomatoes, remember you need to return 10 tomatoes you borrowed. Your research was correct and the price of tomatoes goes down to Rs. 7 per tomato! So, from your Rs.100 you use Rs.77 you buy back  11 tomatoes.

You give back 11 tomatoes to your friend (1 tomato as interest). You know have cleared your dues and made a Rs.23 profit! That in essence is short selling. Hedge funds borrow stocks from their broker at interest if they want to short it. One more thing you need to understand, a short squeeze. Let’s say you’ve shorted a stock, but to your dismay, the stock instead of tanking goes up in value.

In theory, that stock can rise up infinitely which can inflict an uncapped loss. As the stock price goes up, the broker you borrowed stocks from gets wary of your ability to return the stocks you borrowed so they issue a margin call, forcing you to buy the stocks back from the market and closing your position. As the stock price rises and the shorts are forced to buy stocks from the market further fuelling the prices resulting in a short squeeze.

Let the madness begin- r/wallstreetbets:
Closing at $18.84 on 31st Dec 2020, the stock is up 1,625.05%, trading at $325 by the end of January! What did GameStop do in a month to miraculously now command a valuation of $22.67 billion? Well, nothing actually. How stock pricing works in a “free market”(I’ll explain why the double quotes, later in the blog, read on!) is that the people of the stock market determine what a company should be valued at and what its stock price should be, it works on the simple mechanics of supply and demand.

It all really started when the traders on the Reddit forum r/wallstreetbets spotted that the GameStop stock was overloaded with short positions, mainly by Melvin. This meant that very few stocks were freely available in the market, making them much more sensitive to swings in demand. Knowing they could exploit this these Redditors started buying stocks and holding them which drove up the price causing a short squeeze and a gamma squeeze (it’s like a short squeeze but for options) further fanning the flames of the price rise. To portray the wildness of these Redditors, here’s their war slogan “We can stay retarded for longer they can stay solvent!”. This is how they describe themselves, “/r/wallstreetbets is a community for making money and being amused while doing it.

Or, realistically, a place to come and upvote memes when your portfolio is down.”. Immediately GameStop became a cult stock. To add to this, Elon Musk tweeted “Gamestonk!!”, strengthening this “movement”. And, billionaire CEO of Social Capital and Chairman of Virgin Galactic also piled on buying $100,000 worth of call options (betting long) of $GME. 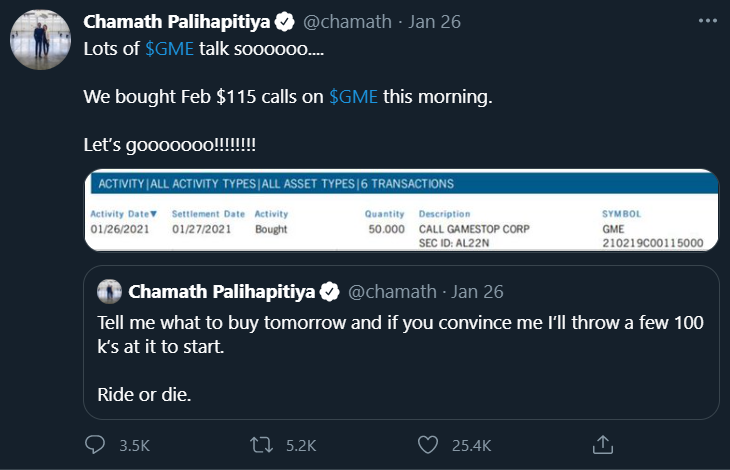 Now, so that we are on the same page, all of this has nothing to do with the company GameStop. The stock was just a medium used to battle it out between internet memers and Wall Street suits.

The winners and the losers... :
The Redditors first spotted $GME on the 13th of January, then taking the price from $19 to $39. On 19th January Citron Research tweeted 5 reasons calling $GME a ‘suckers bet”. The degenerate Redditors did not buy this reasoning and started buying bigger chunks and the squeeze started. Between 1st January and 22nd January, the stock tripled in price. This forced Citron research to exit their positions causing them a loss of over 100%.

This trade also cost Melvin Capital well over $3 billion and two other major investors, Citadel (remember this name) being one of them had to cover for Melvin. One of the heroes that emerged from that subreddit was a user named DeepF*ckingValue who bought $50,000 of call options on $GME and turned it into $13 million in 3 months!

Final thoughts:
But why, you may ask? Well, for the Redditors from the looks of it, it’s just for kicks. They further also targeted stocks heavily shorted by hedge funds like AMC, Nokia, and Blackberry. Remember Citadel and the “free market”? Most of these retail traders use the Robinhood app to trade. Robinhood makes a lot of revenue from Citadel Securities and Robinhood had temporarily blocked users from trading $GME which caused the price to drop for a while. Robinhood did it to “protect its users from extreme volatility”.

So is it really a free market? If I quote Joker here, “It’s not about the money. It’s about sending a message.” for the Redditors. Is all of this legal? Still being investigated. And, can any of this happen in India? “ It is impossible to create that kind of short squeeze in India. SEBI and stock exchanges closely regulate Stock Lending and Borrowing Mechanism (SLBM) which itself is reviewed half-yearly. Also, SEBI and Stock Exchanges have robust surveillance systems and any concentration in stock or F&O is keenly watched through limits on market-wide position limit (MWPL).

SEBI routinely issues inquiry letters as well as notices under SEBI (Prohibition of Fraudulent and Unfair Trade Practices) Regulations, 2003," said Sumit Agrawal, Partner, Regstreet Law Advisors & former SEBI officer. So probably not. All of this can be summed up in this meme I found on that Reddit forum: