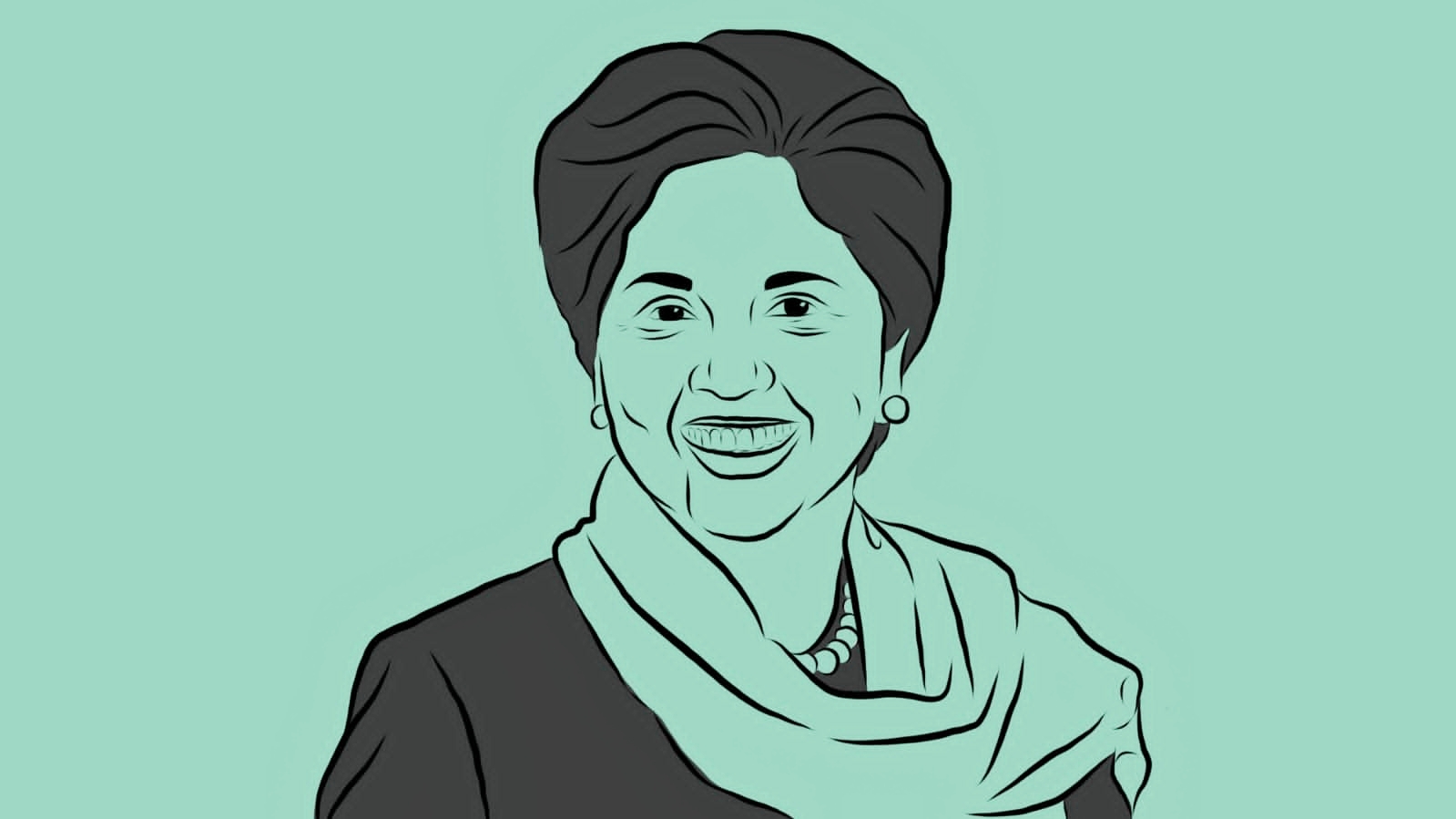 “Just because you are CEO, don't think you have landed. You must continually increase your learning, the way you think, and the way you approach the organization. I've never forgotten that.”

In 2009, she was in Washington DC amongst renowned business execs and politicians. At one point, she found herself standing between the former President of the US Barack Obama and the former PM of India Manmohan Singh. Obama began to introduce the American team to Singh and then mentioned her name. But Singh immediately retorted, “Oh! But she is one of us!”

But who is she? Indra Nooyi is one of the most renowned leaders of the 21st century. She’s PepsiCo’s former chair and CEO, having spent 24 years with the company. She was instrumental in nearly doubling the company's sales and attempted to introduce healthier products & environmentally friendly practices. Indra helped build a strategy to make PepsiCo a consumer company that didn’t have to depend on the sales of its flagship soft drinks.

At the age of 66, she has a net worth of about $320 million, as of June 2022. After all, she helped steer her company to have its products be enjoyed by consumers more than 1 billion times a day in more than 200 countries and territories with nearly $80 billion in net revenue, as of 2021. Since 2019, she’s also been a member of the board of directors at Amazon.

But, how did this Indian-born individual become a global business icon? How did a middle-class girl from Chennai end up leading one of the world’s biggest consumer companies?

Nooyi came from a conservative Tamil family that believed in education and learning. Her mother wanted her to be academically ambitious, asking her to often envision that she was a world leader giving a speech. But, at the same time, her mom was also extremely traditional and wanted females to get married once they turned 18. However, being an aberration to tradition, she managed to convince her parents to let her move to the United States and attend the Yale School of Management on scholarship. There, she was taught that companies are also members of society and what they did ought to be viewed through a stakeholder lens, not just a shareholder lens. For a couple of years, she worked as a management consultant. Then a recruiter called. They asked her to interview for the position of senior VP of corporate strategy and planning at a company called PepsiCo.

Nooyi joined PepsiCo in 1994. There, her job would be to oversee executives who came to the planning department and then roll into management jobs. A big part of her job was mentoring and training. At the same time, she felt hesitant about doing the job, because it was a consumer business: something she hadn’t done before. PepsiCo owned Pizza Hut, KFC and Taco Bell and Nooyi didn’t eat meat, so it wasn’t exactly a match made in heaven. Nonetheless, she persisted to succeed, becoming a chief strategist. At one point, the restaurant arm of PepsiCo was faltering, so she travelled to various restaurants under PepsiCo to find out the issues. Later on, she helped spin off the restaurant business into a publicly traded company called Tricon (now called YUM!) that still owns and operates Taco Bell, Pizza Hut and KFC. Soon, PepsiCo was even offered to buy a fruit juice subsidiary called Tropicana and Nooyi thought this was a great idea, since consumers didn’t engage with their snacks or drinks before ten in the morning and this was a way that could happen.

She began focusing on the nutritional value of PepsiCo’s offerings, with soda sales slowing down and consumers slightly shifting to healthier and non-carbonated drinks. She saw health and fitness as an undeniably huge opportunity. However, it wasn’t embraced by her team, so she momentarily dropped the idea.

In 2000, she was made CFO. She had to dig out her MBA Finance books and relearn how to work in that role. As she was settling into her job, PepsiCo was offered a chance to buy Quaker Oats. It seemed enticing; after all, it had incredible market share with Gatorade. PepsiCo put in a bid, but Quaker Oats wanted a guardrail to protect its shareholders if PepsiCo’s stock fell below a certain price. After discussing with her co-workers, Indra and her team walked away. At that point, Coca-Cola swooped in to offer a bid. Yet, later on, it decided to not go through with the deal. Nooyi’s band decided to stick to their original bid without the financial guardrail and a week later, PepsiCo bought Quaker for about $13 billion. When the deal closed, Indra Nooyi became the President of PepsiCo and in 2006, she became its CEO.

At a time when there was an impending financial crisis and there was mounting backlash against junk food and carbonated drinks, being CEO of PepsiCo would be an uphill battle. People seemed to be going for electrolyte waters, sports drinks, smoothies and iced teas. Indra decided to take her old idea of going healthy and revamp it. PepsiCo incorporated healthier spaces by buying companies like Sabra and Naked Juice and also developed low-sugar Pepsi. The company was positioned to be a responsible corporate citizen, with resources being diverted to promote healthy eating habits. She told her board that she wasn’t going to focus on beating indices; she was going to focus on the duration of returns rather than the level of returns.

Besides championing healthier product offerings, she pushed for PepsiCo to have sustainability measures like workplace diversity & water and waste reduction. She, also, planned to drive innovation in the company through design thinking and making user experience part of the lexicon. She visited markets every week to see what her company looked like on shelves and what products spoke to her as a CEO and a mom.

At the same time, she was also fending off activist investors; these are people who buy a lot of company stock for gaining influence and pressuring management to make changes to the venture. One of them, Nelson Peltz, had gotten a $1.5 billion stake in PepsiCo and wanted the company split into beverage and snack enterprises. She felt this would destroy the company’s sales efforts, delay momentum and destroy competitiveness. Yet, she carefully analyzed what he was asking for and persuaded him against this idea. In 2016, Peltz sold his shares at a profit of more than 30%. Boom!

Nooyi is, also, the chief architect of PepsiCo’s pledge: Performance With Purpose. This pledge is about being responsive to the needs of the world by focusing on delivering sustained growth with nutritious and healthy products, empowering people in communities and limiting the company’s environmental footprint.

And when Indra Nooyi stepped down as the CEO of PepsiCo, her compensation was around $31 million. Woah!

The one thing about Indra Nooyi is that she seems to be committed to health, but carbonated drinks, soda, chips and other junk food were still key products. However, Nooyi remarks that her plan is not to tell people what to eat or drink, but to give them a choice of products that are fun, better and good for them. As long as good-for-you products are not more expensive and less tasty than fun-for-you products, it’s still the consumer who gets to decide. To give credit where credit is due, she did end the use of trans fats in PepsiCo products and drastically reduced their sugar quantity.

The company, also, came under fire for the infamously tone-deaf Kendall Jenner ad in 2017, where the model walked amongst protests to hand a cop a Pepsi. It seemed like wokewashing. Strangely enough, Nooyi clarified that she had never seen the scene with the cop, but the whole ad seems to lack any substance and this may be something that would fall on the shoulders of its CEO to bear the brunt of.

Indra has stated that she has never, ever, ever asked for a raise. Like, ever. She finds it cringe-worthy and can’t imagine working for someone and telling them that their pay isn’t enough. That also received some criticism from folks for sounding a bit elitist, because it seems fair to ask for more money when more responsibilities are assigned and one’s value at a company also augments over time, making a raise something pragmatic to ask for.

All of that being said, it may be irrational to say that Indra Nooyi isn’t an inspiration. She fought tooth and nail to get to where she is and as a first-generation immigrant in the US, she blazed an unprecedented trail, rising the ranks to become PepsiCo’s first non-American CEO. She validated the idea that traditional companies do not have to live in the past, they can look to the future. Her innovative thinking skills and planning make her a force to be reckoned with.

In the face of institutional obstacles, be it race or gender, she overcame it all, armed with her perseverance and ambition and is one of the most powerful business leaders in the world. Many say the American Dream comes with a price. And Indra Nooyi has paid her fair share.

“As a leader, I am tough on myself and I raise the standard for everybody; however, I am very caring because I want people to excel at what they are doing so that they can aspire to be me in the future.”