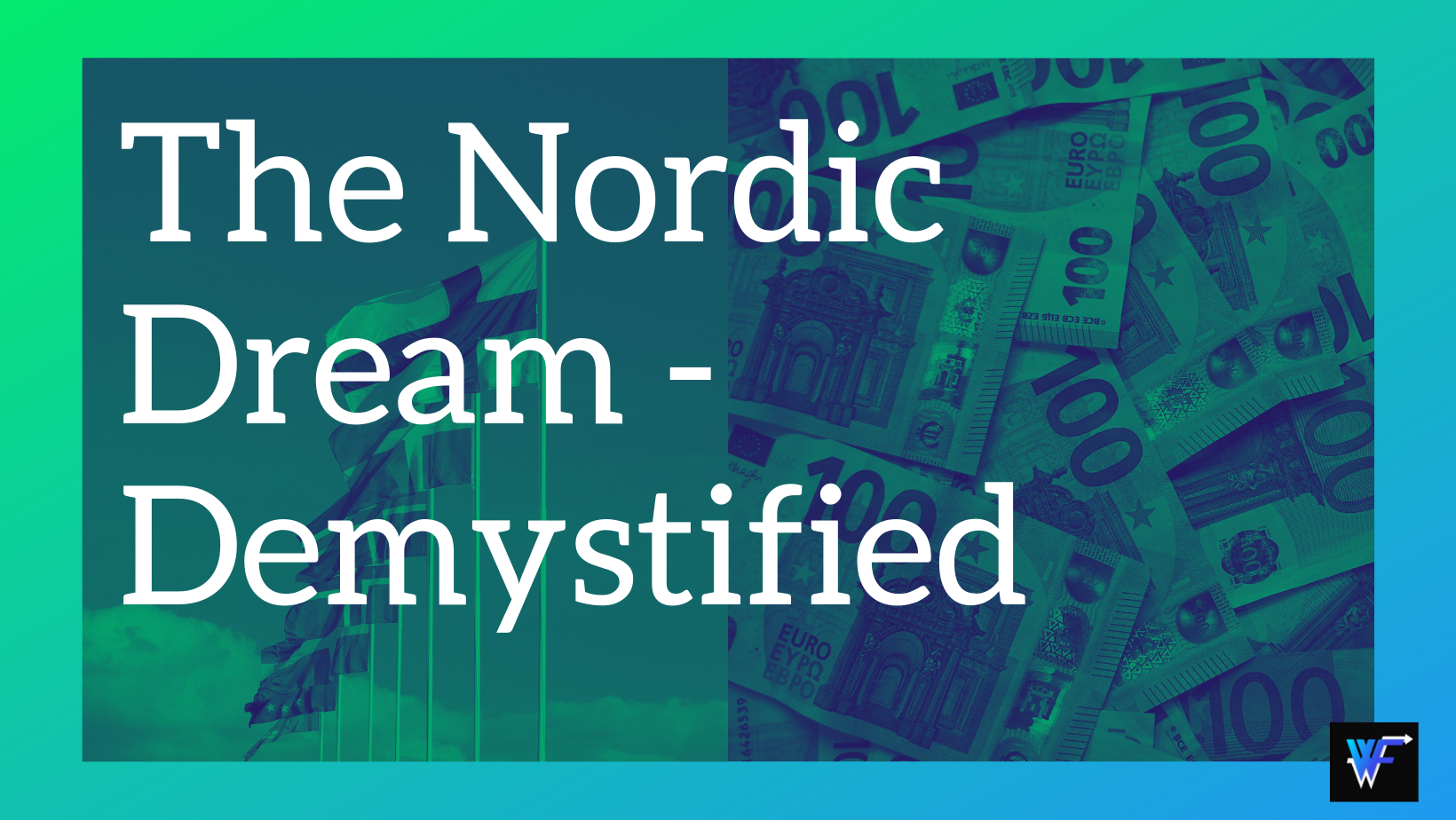 “The design of Nordic tax systems has over time created a fiscal illusion, whereby the public is not aware of the taxes they are paying. One can reflect on whether it is really in line with democratic principles to raise taxes in a way such that citizens are unaware of them. Interestingly, few proponents of introducing a Nordic model of high taxes in other countries stress that such a move would require hiding the true cost of taxation from the public.”
- Nima Sanandaji

There is something incredibly idyllic about the Nordics. The Nordics are the countries in Northern Europe, which include Norway, Sweden, Iceland, Finland and Denmark. Though these Nordic countries may have slightly distinctive cultures, to some degree, they have similar social and economic models, which is a free-market economy that has universal welfare funded by high taxes and active labour unions, with constant income redistribution. These countries have a great macroeconomic performance with low unemployment rates, superlative life expectancies, solid trade surpluses, great working conditions resulting in no minimum wage and some of the highest GDPs in the world, so surely, it must be a utopia and a benchmark for other countries to attain and emulate, as a justification for why more state involvement in the free market is required? It definitely seems like a cool alternative to the winner-takes-it-all style of capitalism to avoid destructive populism, seeming to be a contradiction to the rest of the world strife with inequality.

So, the Nordic model is essentially a mixed economy, where elements of capitalism like economic efficiency and a free market economy meld with social benefits to dovetail globalization and a state of welfare. It seems like the Nordic model flirts with some elements of socialism and capitalism, but ultimately, creates its own niche to have a free market state of welfare, resplendent with social welfare. Redistributive income is a norm to promulgate economic equality in Nordic society. This even applies when an individual retires or is unemployed. As mentioned before, high taxes create social welfare, allowing for more investment in human capital and technically, a kind of risk-reward is shared here, where the entire society shares the risk and collectively reap the rewards. These high tax rates come from individual income taxes, with the objective of stimulating and maintaining economic growth.

Now, obviously, if such a model works and has such cool healthcare, everybody wants a piece of the pie, which means that there’s a major influx of immigrants. There’s, of course, the idea that the state is a hands-on parent when it comes to running and planning the economy and taking over its productive assets. According to OECD indicators, it spends an average of 80% expenditure on healthcare and 5.8% of its GDP on education.

But everything is not what it seems. You see, the economic success of the Nordic Model is predicated on the industries that ‘extract’ in Nordic countries, be it the iron ores from Sweden or the oil from Norway, which, thus, created major carbon footprints. This means that carbon emissions and consumption of resources are very high by Nordic citizens and they have high ecological footprints. Now, countries in the Nordic region are remote and cold for the majority of the year and so, they have limited capacity to produce food and so, there are also high imports of goods, which mean more miles, be it air, shipping or roads.

In terms of being prosperous, they also enjoy the luxury of having a relatively small and homogenous population. In fact, the biggest Nordic country is Sweden, which has only 10 million people, compared to the USA’s 331 million or India’s 1.3 billion. It also did not adopt much class struggle. As Milton Friedman fittingly said, “They have a small, homogenous population that enables them to get away with a good deal that they otherwise wouldn’t get away with.” and so, there are no issues of dealing with a big population. Furthermore, salary is, of course, an important factor for people to be satisfied and the existence of labour unions is also important. But, in countries of a Nordic nature that are more into agriculture, they will definitely face the troubles of having to sustain their environmental resources. And so, it is possible that the Nordic model may not be sustainable in the long term or a framework or template to be emulated by other countries.

Nonetheless, the structure of the Nordic model which includes things like universalism, social cohesion and a welfare state is most likely to stay the way, even with an increased influx of immigration, which is deemed a drain on the public finances of Nordic countries. The issue, however, in terms of emulating it is that high tax rates disincentivize players of the market to work fewer hours because they can afford it and the job of the state is not to end incentives but attempt to create a more level playing field and agents of economics respond to incentives. This regime of redistributive taxation is something that works against the free market and the increasing immigration problem also means that the welfare state cannot sustain itself, be it in the Nordic countries in the long run or the countries that would attempt to imitate it.

Furthermore, it must be noted that Nordic countries also have natural resources, like iron ore, which help find its almost-utopic model, which is not something all countries can have. This is also seen in places like Alaska in the U.S., which have their own oil reserves. What this means is that a Nordic country would have to make a trade-off to be economically successful versus being ecologically successful. Cropland, fishing ground, carbon, forests and grazing land are all profligately consumed by Nordic countries, such as Finland, Denmark and Norway. Some reports dramatically tell us that if everyone in the world were to consume the way the Nordics did, we would need five Earths to sustain us. Ouch.

What’s been seen is that the Nordic welfare model has been more and more convoluted with each passing year. It is possible that people only see the benefits of the model, without contemplating the downside. The public sector is big and expensive. People wish to emulate the Nordic model, but it can be seen that entrepreneurs were leaving countries like Sweden. Globalization, the digital revolution and increasing life expectancy are seen to be megatrends in the Nordic countries and with digital technology on the rise,  large public sector and increasing tax burden would backfire. As tax bases become more and more labile, collecting taxes would have a decreasing scope, even while the demand for social security nets increase.

The goal, however, is to make sure that the safety net doesn’t become a hammock. The Nordic model will continue to remain a poster child for the marriage of socialism and capitalism. As a seeming antidote to the more destructive components of the free market, one can only speculate with vitriolic political rhetoric how long this could keep going. But it does seem that in an era of ecological priority, such a model would not continue to be glorified and so, it promises us a framework we think we deserve, but one which we don’t need. So, yes, they may be league champions, but they’re league champions of a different sport like power yoga. Well, the Nords must be crazy.